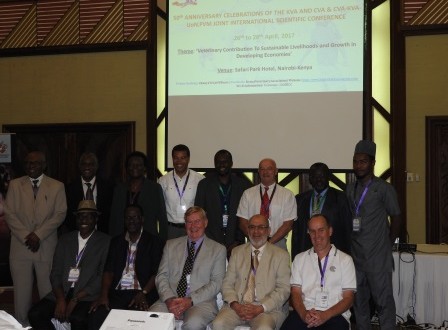 A meeting of the East Central and Southern (ECS) and West Africa Regions of the CVA was held in Nairobi on 24 April 2017, coinciding with joint Golden Jubilee celebrations of the CVA and Kenyan Veterinary Association in Nairobi.

This was an important meeting of regional councillors and key outcomes include:
The reliance and importance of Membership subscriptions and how to engage non-paying members
Making an approach to non-CVA member countries that are interested in being Associate Members
Improving communications, as visibility is essential to be relevant
Working with new partners such as the World Small Animal Veterinary Association (WSAVA)

The CVA convened a workshop on 26 April on Working Equids sponsored by the Donkey Sanctuary. A workshop on small animal continuing professional development issues was also held that day, as part of the KVA’s Scientific Meeting.

The occasion was an important time to celebrate fifty years of achievements and to recognise the foresight, contribution and impact of previous executive officers, regional representatives and country councillors.

Dr Peter Thornber and Dr Jeff Cave also attended World Veterinary Day celebrations in the County of Kajiado. Ten sites were set up by the KVA and County to provide animal health advice, parasite treatments and vaccinations for foot and mouth and rabies. This County lies at the southern edge of the former Rift Valley province, about 80km from the Kenyan capital Nairobi.