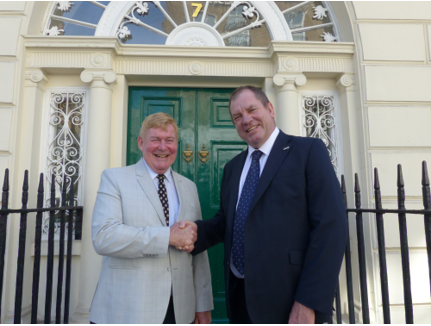 John has over 30 years’ experience in veterinary practice and academia, in the UK and overseas.

After graduating from the University of Cambridge, in 1985, John worked in small animal and farm animal general practice. Specialising in cattle health and production, he became a lecturer in Farm Animal Practice at the Royal Veterinary College in 1990, where he was responsible for the farm animal side of the RVC’s Large Animal Practice (Ambulatory Clinic), serving clients throughout Hertfordshire and Essex.

In 1997 John moved to the Kingdom of Saudi Arabia, where he worked as the Head Veterinarian to the world’s largest fully integrated dairy company, farming over 25,000 high producing dairy cows in a desert environment. He returned to the RVC in 2003. He became Head of the Department of Production and Population Health at the College in 2012 and prior to that was Head of the Biological Services Unit.

Peter briefed John on the work of the CVA and formally invited him to be a keynote speaker at the 7th Pan Commonwealth Veterinary Conference to be held in Bangalore from 3-7 March 2019 http://www.pcvc7conference2019.com. John has accepted and eagerly looks forward to being in Bangalore with us.