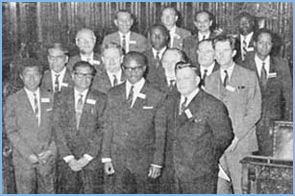 The Commonwealth Veterinary Association (CVA) was founded in 1967. Membership is open to National Veterinary Associations of Commonwealth member countries. Currently the CVA has 54 full members with each member association being represented on a Regional Council by a Councillor elected by the member association. Other non-Commonwealth countries are in the process of seeking associate membership. There are six regions representing Asia, Australasia/Oceania, Canada/Caribbean, East, Central and Southern Africa, West Africa and UK/ Mediterranean. Each Regional Council elects for a four-year term, a Regional Representative who becomes a member of Executive Committee. The Executive Committee is responsible for running the affairs of the Association. As well as the six Regional Representatives there are also a Past-President, Secretary, Treasurer, Programme Director and an Editor JCVA, under the Chairmanship of the President.