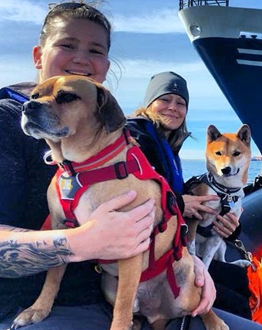 Colonel and Samurai are two very talented dogs. They travelled from Virginia with their handlers, Erin Jackson and Megan Vick, and were here to sniff out rodents on ships travelling to South Georgia. The dogs work for the Government of South Georgia & the South Sandwich Islands (GSGSSI) who have engaged the services of the charity Working Dogs for Conservation (WD4C) to help develop the programme. WD4C was founded in 2000 with the aim of using dogs’ extraordinary sense of smell to help protect wildlife and wild places.

Before arriving, the dogs were trained by being rewarded with their favourite toy and ‘playtime’ when they correctly indicate to their handler that there is a live or dead rodent or rodent faeces present. The best dogs for this type of work are ones with a high prey drive, or a high ‘play’ drive meaning they will do almost anything to get their favourite toy or to get a bit of playtime with their handler.

The dogs are part of a trial run by the GSGSSI to make sure that any vessels going down to South Georgia are rodent free before they leave Stanley. This follows the £10 million rodent eradication programme conducted by the South Georgia Heritage Trust, and is part of a suite of biosecurity measures the Government has put in place to ensure that South Georgia remains rodent free.

Whilst in the Islands, Colonel and Samurai enjoyed getting out and about and have been helping FIG Biosecurity in checking vessels going to rat-free Islands. The dogs also had a very exciting trip out to Kidney Island itself to confirm its rat-free status.

If the trial is deemed a success, the prospect of having detector dogs here in the Islands presents a wealth of opportunity, with benefits not only for South Georgia but for the Falklands as well. Colonel and Samurai are rodent dogs but, in a previous life, Colonel used to be a ‘bed bug detector’. In fact, the dogs can be trained to detect many odours and WD4C recently retired a dog that was trained to 32 target odours! So, detector dogs could be used to detect anything from tiny sprigs of calafate not yet visible to the human eye, to sniffing out fruit and veg in passengers’ bags when they come ashore from cruise ships. More innovative uses being developed by WD4C include using dogs to detect brucellosis in wild animal populations to prevent the spread of the disease to domestic livestock in the USA, as well as a trial to see if the dogs can detect a wood boring beetle in wood products and timber to prevent the spread of the pest.

Detector dogs are used throughout the world to support biosecurity efforts as their noses just can’t lie. Like all of us though, they do have the odd off day, but when they indicate there is something there, the handlers listen. The huge benefit of using dogs for this type of work instead of humans is, of course, time. The dogs will cover a large vessel in 30 – 40 minutes which would take human days to thoroughly inspect and that’s without stopping for smoko.

Colonel and Samurai left the Islands at the end of May but were hoping to get out and about to Bleaker Island and Saladero before they left to do more detecting.
You can follow their adventures on Facebook: www.facebook.com/colonelandsamurai